Funny elf on the shelf ideas that will certainly make your kids jump with excitement. And make your Elf on the Shelf holidays so easy!

With these easy and funny elf on the shelf ideas, nobody in your home will want to miss a single move of the elf. Check them out!

If you are looking for more holiday projects, here are a few you'll love:

Funny Elf on the Shelf Ideas

Are you looking for creative, new ideas to incorporate the Elf on the Shelf into your kids’ holiday experience? This post will make it so much EASIER for you!

First, here's a bit about the famous Elf on the Shelf. It's definitely an effective invention to have one of Santa’s spies in your house!

About Elf On the Shelf

The Elf on the Shelf is a Christmas-time tradition from the U.S. that children everywhere love.

On a side note, if you're decorating your home for holidays right now, get this free bundle:

UPDATE: MORE templates to be ADDED to the Homemade Holiday FREE Bundle!- Join our mailing list here, so you don't miss out on any new tutorials!

Who is Elf on the Shelf?

It's a tiny elf with a cute red hat who visits kids and keeps returning to Santa to let him know if the kids were naughty or nice. At least that was the original idea. For the majority of Elf on the Shelf enthusiasts, the morning is their favorite part of the day. Jumping out the bed, they would start looking for what their Elf did that night. Mix that with a fun diy Christmas sweater and you're sure to have so much fun!

Who Invented Elf on the Shelf?

It all began with Carol Aebersold when she wrote a children's picture book back in 2005. Not so long ago, but the elf from her book got immensely popular, and by now, the cute Elf on the Shelf brings joy and laughter to many many kids.

The only problem we as parents have is how to come up with a new idea every single night. Elf on the Shelf comes just after Thanksgiving and leaves on Christmas eve. That's a lot of daily ideas to cover, and even if your elf doesn't move literally EVERY night, here are many ideas to make it really easy for you.

A bit of mint with Oreos? Source here.

These elves took a dip in the tub! Idea here.

Elf on the Shelf Held Hostage by Dinosaurs

Easy ELF ON the SHELF IDEA

A classic, but always so much fun: toilet paper roll! By Rachel Swartley

Fun Elf on the Shelf Idea With Slime

A hotdog, anyone? A super quick and fun Elf on the Shelf idea via Elf Advent.

Elf On A Pancake Tower?

I'm also thinking if this year, our Elf would mind climbing up a pancake tower, hmmm. I'd need to let him hold a tiny chocolate spread jar or a mini maple syrup bottle, what do you think?

Elf on sleighs by My Mommy Style

Sleeping Elf On the Shelf

Elf on the shelf, sleeping in a Kleenex tissue box. Soo comfy! Find the idea at Pretty Providence.

Rainbow Looming Elf On the Shelf

What about hot air balooning in the middle of the living room? Fun, easy, and looks super cute! Idea by Carey Pace

Star wars And Elf on the Shelf

A Star wars fan in your house? THIS idea from Nerdy Mama is a must-do!

Marshmallow Ideas For Your elf on the shelf

Elf takes a relaxing bath. By Elf On the Shelf.

Day at the beach!

Day at the beach! Idea at Biscuits'n'Crazy.

Elf at a potato sack race

Elf at a potato sack race. Who do you think will win the race? Photo by Jedi Craft Girl.

Walking the dogs - what an easy idea for your Elf on the Shelf! By Picklehead Soup

Elf on the shelf - actually in the snacks drawer, hoping one of the kids would choose to take him to school for snack time! What a fun sight for kids in the morning, idea from Rachel Swartley.

Another one you can use when making kids lunches: elf on the shelf turned all apples into ninja turtles. Fun idea at Frugal Coupon Living

Want some bubble gum? This fun (baloon!) idea comes from Sam Our Elf on the Shelf

Elf on the shelf and Minion bananas - such an easy and quick idea! By Building our Story

Another snow-themed elf: elf can build a snowman - nothing easier than that! Idea found here.

'Got tangled up in the Christmas lights!' idea found at Building our Story

Elf on the Shelf hanging upside down from the kitchen cabinets. I wonder what' he's been up to!

Working out! This Elf on the Shelf is lifting weights! Idea at The Taylor House.

Elf on the Shelf leaves the shelf and -  goes ziplining! This funny idea is from Carey Pace.

And one that's really suitable for the current Elf on the Shelf season:

Elf on the Shelf With A Catapult

A fun way to learn do some STEM activities - what about a delicious snowball fight? These little 'snowballs' are fun to catch and eat 🙂

And to help you, I'm adding answers to your most frequent questions about elf on the shelf:

When does elf on the shelf arrive?

Every year after Thanksgiving.

When does elf on the shelf leave?

Elf on the shelf leaves a child's home on December 24th, which is the night before Christmas.

Who started elf on the shelf

The first person to create the elf on the shelf tradition was Carol Aebersold, the author of the children's book Elf On the Shelf.

Which elf on the shelf to buy

There's a site dedicated especially to getting an elf on the shelf, here.

Can elf on the shelf move during the day?

The Elf should not move during the day, as long as the kids are awake. The Elf only moves at night when making its trip to the North Pole every night, reporting to Santa. After that, it returns to the house and this is the moment when he assumes a new position for the next day.

What age is best to start your elf - shelf tradition?

The recommended age to start this holiday tradition is around 2 years age. Always your choice!

What age should you stop elf on a shelf?

Simply, when a child no longer believes in Santa. That's roughly around the time they start doubting a single character can travel the whole world in a night or so. Which inevitably brings us to the last question:

How do you end Elf on the Shelf tradition forever?

But hopefully, it's a long time till then, and you and your kids get to enjoy the elf's presence for years. So many people love the elf on the shelf tradition, but maybe need a little help coming up with new and funny Elf on the Shelf ideas for every December morning, without spending tons of time searching for the best elf ideas on the net. I hope these fun elf ideas have been helpful for you to create a beautiful and fun Christmas tradition for your kids.

So, what will be your Elf's first move?
Make sure to save this post so you have all the ideas at hand when you need them:

If you are looking for more holiday projects, here are a few you'll love:

Get email updates and never miss out on new patterns, printables, and tutorials:

Or …check out the gift bag pattern in 6 sizes in our shop - a super easy no-corner-boxing sewing project. Reusable gift bags for all your future gifts! 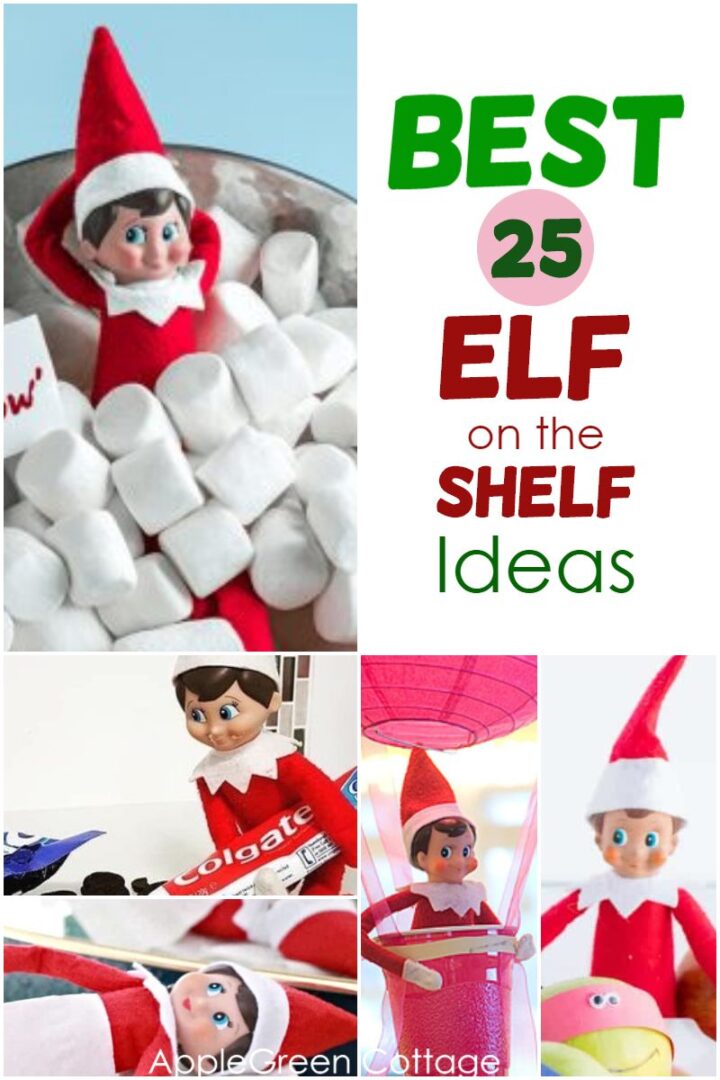