Sewing » Learn To sew » How To Sew A Button By Hand

See how to sew a button by hand - easily!

Sewing buttons by hand can be so quick and easy! It's one of the simplest closures for bags, in addition to these KAM snaps, or the old good drawstring closure like with these bins (so adorable!) and very easy going, compared to the very popular but more advanced closures like these magnetic snaps and similar. You can use buttons for sewing patch pockets!

If you don't need to use this basic sewing skill on a regular basis, this is the video to watch and learn sewing buttons within minutes.

A few more basic skills - and life hacks that might be handy for you:

How To Sew A Button

A button fell off and now you're trying to figure out how to sew a button on pants? Or is it a shirt, and you need to get that button back where it belongs, before the meeting starts? Not an uncommon situation at all. See how to sew a two-hole button - so it stays where it needs to be and does not fall of again. At least not any time soon 🙂 Easy - peasy!

Video - How To Sew A Button By Hand

I've recorded this button sewing video for all of you visual learners - enjoy!

And to make it easier for you, I've also made written instructions for sewing buttons, all with step-by-step images. So let's see first what you need to sew a button.

Supplies You Need To Sew Buttons

How To Sew A Two Hole Button - Instructions

Step 1 - Thread the Needle And Tie A Knot

Cut a 25" or so from your thread spool and guide one end of the thread through the needle eye. Fold and make a simple knot to tie the loose ends together.

You'll want to hide that knotted end of the thread, right? This is why you start by making a stitch exactly at the spot you want to attach your button to, on the front side of the fabric:

Starting at the front, push the needle to the back side and then again up to the front side.

Step 3 - Stitching through the button holes

Once you have enough thread on your button, with a doubled thread it could be something between 5 and 10 times, depending on the button, you'll want to push the needle from the underside to the front side of the garment - it should end up right under the button:

Step 4 - Tie off the thread

Pull on the thread and lift the button again a little, then tie off by creating two or three small knots below the button.

Cut off the excess thread. Done.

How To Sew On A Four-Hole Button?

You need to make an x when sewing, simply meaning that after you've sewn through one pair of holes on a button, repeat again to sew the other pair:

It means you'll need to repeatedly pull the needle throought the third and the fourth hole on teh button, just as you did before. Once your button is attached tightly on the fabric, you're done.

How To Sew On A Shank Button?

Actually, even easier than sewing a simple two-hole button, because you don't care if the thread looks super aligned and smooth. When come up with the needle through the fabric, go through the shank and back down on the other side. Repeat several times and you're done. I'll need to add more photos some other time, but for now, let me just stop here or else I'll never publish this how to. 🙂

Every Button Needs a Buttonhole

See my other tutorial from the basic sewing series if you need to see how to make a buttonhole.

I hope this video and tutorial have been helpful. If you liked it, share it or save the image below to Pinterest, so you'll have this how-to available any time you need to sew a button:

Get email updates and never miss out on new patterns, printables and tutorials. If you sign up at THIS link, you’ll also get the Fabric Hanging Basket Template for FREE, right now. A cute and easy-sew!

Or …check out this popular PDF pattern – the Aiden Cell Phone Purse - Click through to see what's on the back of this cool phone bag! 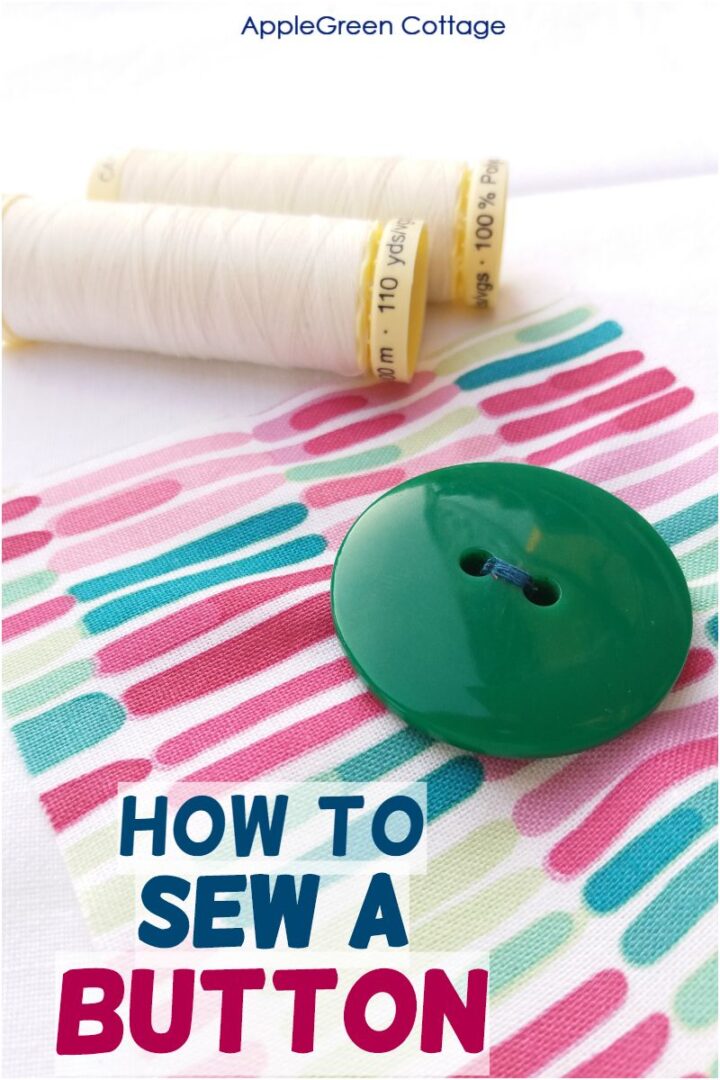